My youngest brother’s daughter Natalie, got married this past Sunday. The wedding was held at a farmhouse about 45 minutes north of Toronto. The ceremony was to be held outside, and after, the big reception was held in a beautifully decorated barn.

During the prior week to the wedding, many of our family members were keeping a close eye on the weather predicted for that day. Rain was predicted as every day passed, as we remained hoping for a different turnout. The weather we’d been having for the past month has been hot and humid with hardly any rain. The humidity lingered in the thick air, begging to be released.

I kept praying that Sunday wouldn’t be the day the heavens would finally open up to rid us of the heat. Sunday morning I woke to sunshine, with a bit of cloud cover. I did my ‘sundance’ and asked my parents in heaven to please hold back the rain for Natalie and Sam’s wedding, if only for the ceremony.

As we drove up north, the sun turned to black clouds and it began to pour. By the time we arrived and exited the car, the rain had turned to drizzle, then it stopped as we proceeded to our seats in front of the Chupa (the covered arches, a symbol in the Jewish faith, where the bride and groom get married under). Suddenly, the winds picked up and the sky was getting dark again. The 80 plus degree temperature had dropped to what felt like 50 degrees. As neatly done hairdos were blowing, and us women dressed in sleeveless attire in anticipation of the heat and a non air-conditioned barn were shivering, I was feeling anxious and wishing the ceremony would start before those thick ominous clouds threatened a big storm. Some had commented it felt like we were suddenly transported to Kansas, The Wizard of Oz.

The music began to play – Love You For A Thousand Years, and the wedding party proceeded to walk down the aisle. As my brother and his beautiful wife came down the aisle, arms linked to their precious daughter, the sun forced its way through the clouds, and the temperature climbed back up to near 80 degrees. Throughout the half hour or so the ceremony lasted, the sun shone brightly, and some of us were even sweating. I knew in those moments, my parents were looking down on us and had somehow intervened by holding off the rain and shining a brief time of sunshine down on their granddaughter’s wedding. 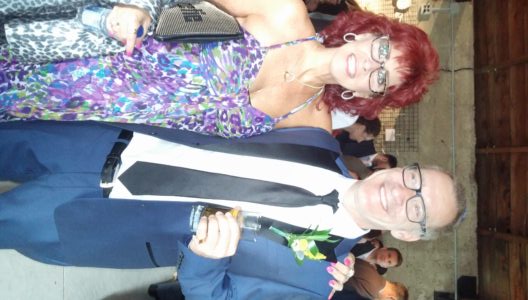 Me and my brother (brides father)

Only moments after the ceremony, the temperature quickly dropped once again, and a light sprinkle fell from the sky. I truly believe my parents were there with us to watch their granddaughter marry as they held off the rain and left behind their joyful tears from heaven.

62 thoughts on “The Powers in #Heaven – A Wedding Story”