Some of you may have read my book, Have Bags, Will Travel, and could consider this post as a little side chapter to that book. And for those who haven’t, you will find a detailed accounting of my flight home from Phoenix, Arizona. 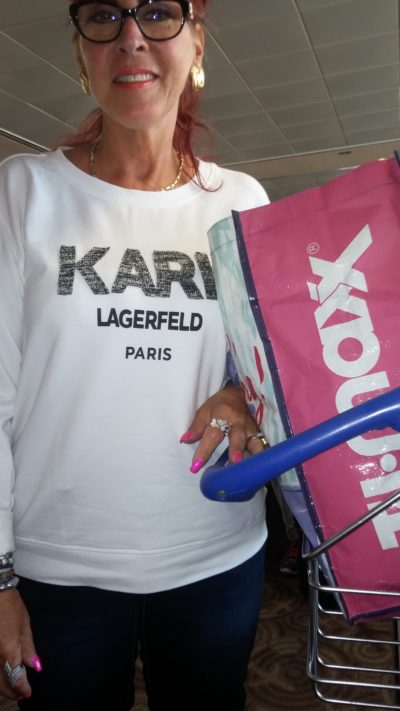 My usual bag of tricks worked in preparation for airport packing strategy 101:

Hub had limited me to three bags between us instead of the allowable four. Although I’m not sure why he was so adamant because I became the lifter and schlepper of all bags. We were each allowed one carry on bag and one personal item. Said personal item for me is my purse, but that didn’t mean I couldn’t put whatever I needed in it, mainly another purse. I’d also brought with an extra folding bag for another carry on we may have needed for our return. Hey, it was regulation size and after all, hubby doesn’t carry a purse so surely he was allowed another ‘personal’ carry on item. 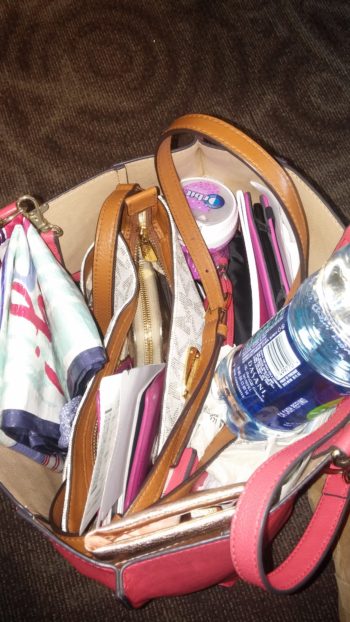 Each suitcase is allowed up to 50 pounds weight. I had purchased my new trusted mini scale to weigh the bags before setting off to airport to avoid unpleasant surprises once the bags were ‘officially’ weighed. As it turns out, each of my three bags came in weighing 49.5 pounds. What a miracle. And thank goodness I brought that extra carry on, for a good 10-15 pounds weight of gifts I’d purchased.

I also had with me a huge plastic shopping bag with handles. This baby I use to put the extra carry bag inside along with coats, cowgirl hat, water bottles and any incidentals that wouldn’t fit my purse, just until I got to the boarding gate to avoid having to carry all that extra stuff. I know that big plastic bag would be a huge flag to boarding attendants, so for boarding purposes, the carry on comes out, the coats and hat get put on, and all other incidentals get thrown in wherever they may fit. Smaller purse had already been neatly tucked into bigger purse (okay, maybe it was a tote bag, disguised as a purse), where all other items that didn’t fit the smaller purse went : sunglasses, phone, kindle, notebook, water bottle, jewelry roll, make-up pouch, two masks, and some other crap. Smooth boarding! 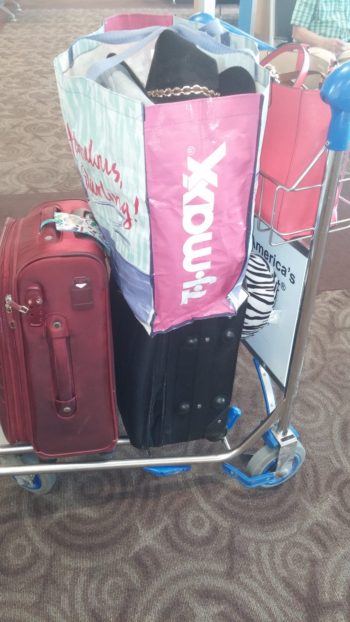 Once on the plane, the hackers and sneezers begin their symphony of song. Besides the fact that I can’t stand the sight of blood, I know I couldn’t be a surgeon because I spent the better part of the flight adjusting my mask so I could breathe properly avoiding the fog up of my glasses. Hub and I had previously inhaled our Colloidal Silver spray in our mouth and nostrils as instructed by the naturopath, before boarding to prepare to fight off the germs circulating the airplane. (We weren’t interested in a repeat of last year’s return when we contacted influenza on the airplane.)  I felt secure with the Colloidal Silver circulating my throat and nasal passages and almost hesitated to wear the dreaded mask until Mr. Winnipeg sitting two seats away by the window began his sneezing and coughing repertoire and other sickies soon followed suit. I didn’t dare eat and barely took sips of my bottled water for fear of staying out of the mask too long. So I remained fussing and pulling at the mask to breathe with ease, already surrendering myself to odd looks from other passengers, where I no longer cared about their wondering looks about what disease it was that I may have had.

I caught my other seat mate, Miss Badly Glued on False Eyelashes, glancing at me, peeking through the corner of her eyes while on her Ipad. Her questioning eyes wondering why I was wearing a mask. I finally positioned my mask in a bearable position when I had to lift it when the stewardess passed by asking if I’d like to purchase anything from her cart of microwaved meals to eat. As I did so, I couldn’t help but wonder if the various orange marks from my lipstick had stained the mask and left their mark on various parts of my face as I politely declined her offer.

Mr. Germy Winnipeg in his shorts and sandals ( what’s up with these diehards wearing summer attire coming home to winter?), sat by the window and decided to shut the shade as the plane took off, keeping me from having my last arial views of the beautiful Arizona mountains. He was yapping to Miss False Eyelashes in the middle seat about having to fly all the way to Toronto just to connect and fly west back to Winnipeg. The lady in front carried her tiny poodle in a bag on her lap as she flapped away about how small the ‘doggy toilet’ area was in the airport and that she expected it to be much bigger so her dog could run around at leisure before the flight. Really?

The stewardess later came by to bring us our customs declaration forms to fill out, my favorite part . . . Not! I’d kept the receipts as I’ve learned to do, from my many purchases of various shopping ventures, but had yet to sort them out, and took them out of my purse to calculate and write down the value of goods I was bringing back on the customs form. I’ve found this procedure to be helpful, by keeping all receipts in hand to hand customs officer if asked what I purchased, showing I’m organized with receipts in hand, it somehow makes my claim more certifiable. (I may accidentally on purpose omit some receipts.) I thought nothing of my method of receipt accounting when I felt Miss False Eyelashes watching me and my thick wad of receipts when she uttered her first words to me, “Oh, you’ve been busy.” Sheesh! That’s what I get for minding my own business!I turned my head around to acknowledge her comment with my smiling eyes while my mouth stayed tight under wraps.

Poodle lady in front was driving the stewardess crazy with dog questions and poo issues. I tried hard not to listen. Hubby slept most of the four hour flight home, cramped in his seat, waking to the sound of each cough and sneeze echoing through the plane, turning his head to look at me to ensure I had my mask on.

I kept busy reading on my kindle and drafting this post in my trusted  ‘Professional Day Dreamer’ notebook to document the flight home. Miss False Eyelashes kept eyeing my writing through the corner of her eyes as she continued crushing candy on her Ipad. It’s a good thing my handwriting is atrocious, I thought, as I couldn’t help but wonder if she was wondering if she was about to be put into my story.

We were almost ready to land after a last 20 minutes of frantic turbulence when I decided I should use the washroom before having to wait in customs lines and for baggage to come out. I took the opportunity to go when there was nobody in line and the seat belt sign was still on from the rocky ride. The stewardess standing there warned me that I should be sitting as I warned her that I should be using the washroom. I won.

If any of you know my phobia about germs, you will know that my bladder has to be bursting before I’ll even consider using the germ infested airplane toilet. After watching half a plane load of passengers use the stall for the previous 3 1/2 hours, without going into great detail, I’ll just say that it was wet, cramped and sparse of toiletries in there. I lift the lid with toiilet paper, carefully pull down my pants to a grinding halt just before they reach my ankles so no part of my clothing touches the floor or bowl, and do the proverbial squat. As I get myself put back together and wash my hands, I discover no paper towels to dry hands. I become more grossed out thinking how many people have used this toilet and didn’t wash there hands because of no paper towels. How long were there no paper towels in this washroom? I wash my hands and rip off a long stream of toilet paper to dry them and then to open the lock and door handle with before disposing of it. I alerted the stewardess there were no paper towels and she nodded in agreement telling me she knew and they ran out. I shook my head in disgust and walked back to my seat wondering how they ran out. When did they run out? Aren’t they supposed to clean a plane after each landing and check supplies, especially ones which pertain to cleanliness?

The plane was finally approaching landing, My sister had told me that spring had come early the last week or so in March and they were already wearing sweaters. We sailed through customs. I handed the officer my declaration form and he didn’t so much as ask me one question this time. Usually I’m asked, what did I buy, how long was I gone for, am I carrying any liquor or cigarettes, bla bla bla. Nada. I handed him the form, he looked up at me, stamped the form and said, “move on.”  Hubby and I understand one another’s looks well. We looked at each other with questioning eyes, careful to never speak until we’re out of custom’s orbit for fear of microphones and/or cameras. We were both wondering if the quick pass through meant we’re good to go, or if the officer didn’t even bother asking a question because he automatically decided we should be further investigated.

We collected our bags with a porter in waiting to help us out, and when we got outside it was freezing rain. The limo took us home on a slow crawl through the snow covered and icy highway. I looked out the window questioning myself, Are you kidding me? I wasn’t away long enough to avoid winter’s wrath? I thought my sister said it was spring? Was this a Karmic payback for being away and avoiding most of winter?

Once home, I called my sister. I asked her what the weather was all about. She told me it was payback for me, and I brought it on for having so much sunshine throughout the winter on vacation. Nature’s little joke. The next day was mild and rainy. By Sunday the sun was back and the temps reached the high 50s, and supposedly it’s supposed to stay that way.  Onward into spring!

51 thoughts on “The Return of D.G. Kaye – Flight Manifesto”