We woke up to spectacular ocean waves crashing and gorgeous beach views every morning, which we enjoyed as we ate our early breakfasts just after sunrise. Sunshine with a side of ocean breeze was just what the doctor ordered for both us.

Previous to our trip, my husband was unwell for a few months. When we left for this vacation, he had just graduated to using a cane from using the aid of a walker. He was so excited to go away that he said he was content just to lounge on the balcony all day while I’d go down to the pool. But miracles abounded. 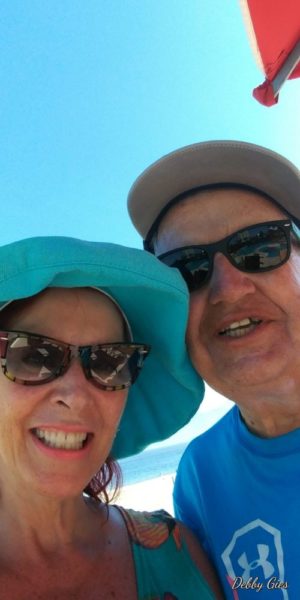 By day two, hubby joined me at the pool. I got him to take little walks with me on the beach – sans cane. By the third day of pool lounging and after taking our showers, we walked up the main street for a couple of blocks to get familiar with what was available to us. Walking on the narrow sidewalks full of cracks and high steps up and down from curbs, he began to tire so we returned back to the condo. We locked elbows as we ventured back the few blocks but I was elated within that my husband could walk with me without the cane.

By the next day, hubby seemed to be back to the man I knew two years ago. Lots of sleep and sunshine was surely a healing tonic. He ate his breakfast and eagerly gathered up the towels for the beach chairs to go down early to secure our chairs of choice for the day. This was the vacation job my husband always had taken on, and had previously told me it was going to be my job now, but I never inherited the duty as he cheerfully would go down to the pool every morning each day to mark our spots. I’d do the breakfast dishes while he sat patiently waiting me for come down and join him about two hours later each morning. While I’d catch up on emails and social media check ins, he’d happily chat at the pool with other husbands who were doing the same – saving their chairs until their wives would join them. It seemed to be a ritual by many seasoned travelers.

Everyone seemed so friendly at our pool, most vacationers were there for two and three months, and majority were Canadians – most from Quebec, others from Vancouver, Alberta and Saskatchewan. We all had one other thing in common besides being Canadian, and that was our desire to get out of the cold Canadian winter.

We had our daily visitors on the beach – vendors selling T shirts, beach coverups, hand crafted items, sunglasses and more. But the most awaited were ‘Muffin man’ and ‘Mango man’. Only once a day we’d hear the shouting out of Muffin man as he walked across the beach and passed by each resort pool, calling out “Muffin man” to alert all those eagerly awaiting his pass by and raising curiosity in the newcomers like us.

At approximately 11am daily, the Muffin man made his rounds past our place with his huge round platter balanced on his head, full of huge muffins, slices of fresh baked coconut or cheese pies. and apple or blueberry turnovers – the same menu daily and for the mere price of 15 Pesos, about the equivalent to 1 Canadian dollar.  The colorful Muffin man complete with eyeliner and mascara and a jovial personality, had no problem unloading his tray and my husband became another fan of all the goodies presented daily. Mango man came by a few times a day with reloads of his mangoes already peeled and creatively sculpted into flowers on a stick, which were appealing to many while the hot sun burned and those juicy fruits had all the work done for them to, ready to just purchase and indulge into.

From our pool seats we could view the ocean only steps in front of the roped off private part of the beach in front of our pool where we’d see horseback riding, and even a few whales popped up for air only meters from shore. Sadly, my quick reflex camera skills weren’t quick enough to grab a photo of the whales before I could set up the photo, they went back into the Pacific. And we had the best massages right on the beach by registered massage therapists at the hotel next door. The massages were done up on a slight hill right in front of the ocean. The massage booth was complete with two comfortable beds, aromatherapy that wafted through the air as the ocean breeze blew through the white canopied curtains that hung from the four sides of the makeshift open air massage room. And only the sounds of the waves crashing and birds chirping nearby could be heard.

The lookout edge of the pool is where most of the ladies hung out while cooling out of the hot sun – you never know who was going to pass by selling something of interest. Of course I’d bought a few beach cover-ups and made friends with some of the Mexicans who schlepped their wares all day back and forth along the beach all day. Every time I wore a new one to the pool I’d get asked where I got my cover-up. I told them I’d send Lisa over later to the pool’s edge, and got her a lot of business.

We made some new friends while away. Two of my new friends – Jean and Bertholle, are from Quebec. We met in the pool and became fast friends. Jean happens to be a medium and a writer! He has just finished his manuscript and I referred him to my editor who happens to be bilingual. I also promised to help with with trying to find a translator to get his book from French to English, and urged him to start a blog. We got along famously between speaking my broken high school French and their broken English.

We also made friends with a lovely couple – Claudette and Alain, and look forward to spending part of the winter with them again next year.

We also met a lovely couple who own a magnificent unit in our condo – Eric and Leticia. As they live in Guadalajara, they keep their unit for their beach escapes. They offered to rent their condo to us next year. Of course we’re taking them up on it. It’s rather large with 4 bedrooms, with the master bedroom and bed facing the ocean!

Until next time, I’ll share a few magnificent sunset photos  I took from my balcony. Many more to come. 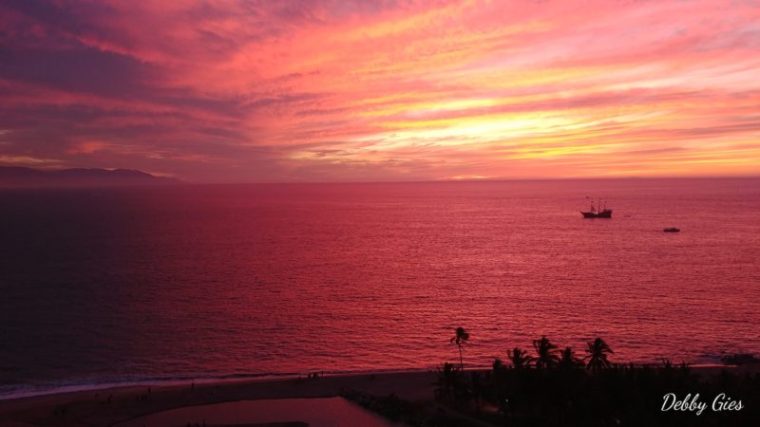