My recent vacation was so jam-packed full of fun and activities that I was flummoxed with where to begin, so I decided, why not begin from the beginning. As many of you know, I enjoy writing about my travel adventures, and ‘getting there’ always entails some of my observations and rants. So for this first post on my recent trip I’ll begin with the flight to Puerto Vallarta, Mexico.

What could be possibly go wrong?

I was ready. Every detail had been looked after. I managed to get ourselves bumped up to first class for a not bad fee. I’d previously booked ‘preference’ seats in economy costing $55 per seat, each way, allowing for bigger seats and more leg room. On top of that additional fee, it was going to cost another $80 per person for 2 checked bags each, and still, no food was free with those seats. I made a point to mark off ‘wheelchair’ request on my husband’s booking because I learned from previous trips that not only did that speed things along for us for the very long walks to security checkpoint and worse – to the gate – a trek my husband can no longer endure, but being in a wheelchair at the airport definitely has its perks. An airline assistant wheels my hub through to security with no lines to await in because we’re taken through to wheelchair access line, and me being his companion gets to share in that perk. The assistant proceeds to wheel him through to the gate, and of course, we’re granted priority boarding before the masses load on and chaos ensues with everyone trying to fit their often over-sized carryons in the upper cabin bins.

When we were offered to upgrade, I was sent an email from Air Canada offering the upgrade if I placed a bid on a sliding scale of how much more I’d be willing to pay per ticket for the opportunity. I figured out the cost and took a chance with my bid after figuring that the bags and seat I’d already purchased per person were already adding up to $135 per person and settled on offering $300 more each toward the bump up. If they accepted it (on what I felt was a fairly empty first class section, after checking seating availability first), I was really paying about $170 each for the upgrade and the previous seats I booked and paid for would be reimbursed to me, plus we’d be given meals. I had nothing to lose.

Let me preface this by saying that last year we did the same trick and it was fine. Besides the seating room and free bags, a hot meal is included and all the snacks you want, plus of course, priority boarding, and free meal and drinks in the First Class Air Canada departure lounge while waiting at the airport.

I knew this was a much bigger plane than we’d previously traveled on to Mexico, which of course meant more seats available in first class, much to my chagrin, it seemed to me that they stuffed in more first class seating to obtain higher fares, taking away some of the comfort – as in leg room!

By the time my upgrade was accepted, we ended up in the last row of first class. Our chairs didn’t recline because of the makeshift, cardboard-like wall that separated first class from economy. Oh, and of course the tiny curtain that gets pulled closed upon take-off to separate the 2 classes. I’m pretty sure there was a woman with ants in her pants in the first row behind us in economy as that partition wall was banged on a lot, lord knows what that woman was doing. At one point the woman must have fallen and rolled halfway under the curtain as she continued to busy herself with taking up and down her carryon on bag several times from her overhead cabin. Half hour into the flight, the menus came around for breakfast. There was nothing for me to eat with my dietary restrictions so I wasn’t a happy camper.

Alas! We landed. Being in first class, we deplaned with the first class round of departures first. My hub was on his cane and I was schlepping my hugeeeeee tote back with purse and computer bag inserted in it, my husband’s hand-held carryon bag full of our medications and other remedies, and pulling my own carryon behind me. When we approached the exit doors there was no ramp with a wheelchair assistant awaiting, BUT A FLIGHT OF STEEP STAIRS to get off and get onto a bus to take us to the airport. Yes! Nobody told us we would be busing in from the tarmac, and I was stunned. I turned to the stewardess and voiced my dismay, “Are you kidding me??????????? What would happen if there was a passenger with no legs????” I received ZERO response.

Needless to say, I was pissed! Hungry and pissed at that! So I rearranged my carryons, placing each ‘heavy’ bag on one shoulder, grasping my roll on carryon in one hand and holding my husband’s arm with my (laughably) free hand as he slowly took on one steep, narrow stair at a time til we got down. Once down, a Mexican wheelchair assistant awaited with a wheelchair to get my hub on the bus as I dragged myself and bags and followed.

Puerto Vallarta airport has undergone some major renovations in the last year as it expanded it’s once tiny airport to accommodate the ever-growing amount of tourists that visit annually. It’s beyond me why with the amount of Canadians dominating the tourist scene there why Air Canada got bumped from having its own hangar to pull into. But once off that plane, despite having an assistant wheeling my hub through Mexican customs and patiently awaiting with us to collect our bags, I knew we still had a few hurdles to cross. Once bags are collected and walking through to get to the taxis, you first have to pass a mob crowd of people selling you stuff. No, not trinkets and Tshirts – more like a FREE taxi ride (not free). I found out quickly last year that these ‘vendors’ pay airport fees to be able to mob into a ‘meet and greet’ atmosphere when plane loads of people exit the airport. These ‘free’ taxi rides come with a price, mostly time-share offers where you are expected to spend almost a whole day visiting a property for rent, listening to 2 hour long presentations and sometimes given a free meal for doing so. Certainly not worth many people’s time (I know because we once got caught in it nearly 2 decades ago in Acapulco).

The trick is to keep walking. Don’t ask a question or they’ll never leave you alone. The salespeople are like trained hounds. Once outside in the beautiful sunshine with a packed airport full of people waiting for cabs, there are choices of various taxi stands to choose from. With the hot sun beating down on me and sweating in my rather warm traveling clothes, I stood searching out the shorter lines. While standing, a cab service manager (yes, they’re all managed) thought I may have looked like an easy mark over-burdened with carryons and a cart full of luggage with a husband in a wheelchair. He offered me an SUV cab ride for $55 U.S. dollars. My response as I sweated with aching arms, “What kind of drugs are you on? I’m not paying $55 US for a 5 minute cab ride” then I proceeded to move toward a regular taxi cab line. I told the cab manager where I was going and he quoted me the fair price of 250 pesos, which I knew was the standard airport fee to my destination, even though it was double the price of going to the airport because it always costs more to get out of an airport with airport fees added onto the taxi fee.

Finally, we got in the cab with all our luggage, and the driver proceeded to drive off when my inbred habit of double-checking kicked in and I wanted to verify with the driver that the fee was 250 pesos. “How much is the ride?” I asked. He replied, telling me it was 500 pesos. “Take me back” I raised my already impatient voice to the driver. It’s 250 not 500!” The driver didn’t respond but turned the taxi around and stopped right back where we got in. I jumped out of the car and approached the cab manager and asked him why I was told 250 and the driver wants to charge me 500. He told me the Flamingo hotel is further into town in another cab zone for fares and I told him, “I’m not going to the Flamingo!” He apologized and 250 pesos and 7 minutes later we finally arrived at our rented accommodations.

Within 2 hours later I was unpacked and the sun was setting, and too tired to get changed to go eat or grocery shopping. Hubby went down to take out dinner from the restaurant attached to our condo. I ate my chicken fajitas and sipped on my maragarita on the big beautiful balcony, zenning out at the ocean. Relaxation mode begins. 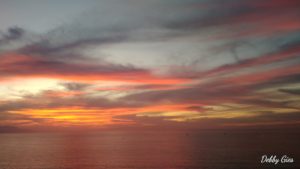 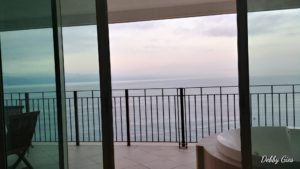 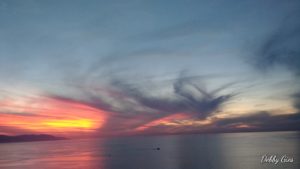