Rage crying and guilt. It’s a thing. And it’s real for me. Like Elizabeth Kubler-Ross states in her book, On Grief and Grieving, there are five stages of grief and you may not feel them in order, but surely everyone will experience them all. Well, I’m still in big time denial, a.k.a., shock, and that doesn’t mean I don’t believe my husband is alive, literally, only that numbness and other defense mechanisms set in and help to play games with my mind to sort of attempt to ‘take the edge off’ the heaviness by playing the ‘pretending game’. Like when I actually get busy doing something, I pretend George is sleeping in the bedroom. But of course, that only lasts so long.

The five stages of grief are certainly not in same order for me. My denial stage is the shock not worn off. Depression is my inner rage. Bargaining is useless, as it’s much too late for that, so I’ve switched that one up to guilt, because guilt is part of the heaviness I carry within. And as for acceptance, it’s so far off I can’t even visualize it.

Why didn’t I know? Why didn’t I know! I’m beating myself up at why my husband couldn’t be saved before he became terminal.  I’ve always looked after him. Every little symptom I’d report to the doctors. Covid made everything harder and worse. I can’t stop replaying the summer before he died. He’d complain and question why he’s so tired. What did I know? He was aging, he had ‘other’ issues, we were locked down for Covid, no real living, and no more getting to actually see a doctor! Tele-health calls were scant, but my husband had so much bloodwork done in the last year of his life, how did nobody catch anything? Labs should tell a story. Everyone was so busy taking care of his other issues that the possibility of cancer was totally over-looked.

Bloodwork weekly, low sodium levels, chronic indigestion and sleeping in half the day. I worried all the time. I spoke with doctors as much as I could get hold of them. Was nobody as curious as me? Did anyone consider something worse? Why did it take til February of this year to put him through the ringer of all tests til the grim discovery would show? He was so bloody tired!

These questions haunt me and squeeze my heart with grief when I start screaming out the whys. Yes, if my love could have saved him, he would have lived forever. Covid has shut down most of the world and the ironic part about it is that thousands more die because they can’t get a surgery booked or even see their doctors in the live. Labs are helpful – somewhat, but there’s nothing like being looked at by a doctor, to look in the eyes, skin, listen to hearbeats and breathing.

I’ve been told that my questions are all part of the grieving process, despite me feeling they are all valid questions. I’m living with guilt that I didn’t do enough for my husband. I didn’t scream out to doctors, my whys. People were dying from Covid and our doctor’s hands were tied with rules and regulations with lockdowns and cooties. Doctors not seeing patients, hospitals not allowing scheduled surgeries. Who was I to fight the system? This system has killed so many others who couldn’t and can’t see a doctor unless they were taken to emergency and admitted through the system. No. Right now I am far from acceptance. Nothing can bring my husband back, and yet, the guilt engulfs me; like crying over spilled milk, I know it will get me nowhere except into a darker abyss by dwelling on the whys, yet, I can’t stop asking.

Yesterday was my husband’s birthday, only weeks after he passed. I had extra anxiety all weekend. I decided I’d be able to handle the day better if I went to visit his grave. I struggled with it being too soon to go there, but feeling worse if I stayed home and grieved the day all day at home. I went to visit his grave, although I somehow feel closer to him here at home. They hadn’t even finished shoveling more dirt and laying the grass over where he was buried. Remnants of the funeral flowers and ribbons lay scattered over his grave. I threw in a few of my personal stones – rose quartz for love, along with some others, and I placed the stick of the little balloon with the cub on it that says “I love you” in the ground. It was attached to the little puppy love who sleeps with me on his pillow. Puppy love didn’t need to hold on to that balloon anymore because he has me beside him, so I thought Cub balloon would do better keeping him company at his gravesite. 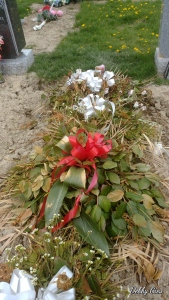 Note: I recently wrote a post about the state of craziness here in Toronto with vaccine output. I am happy to report that in the past week, our province has got their act together and currently 50%, almost 1.5 million adults, have had their first Covid shot in my city, despite the detrimental number of cases still occurring daily for weeks now, approximately 3000 new cases daily. And one very special nurse who promised they’d save me an Astra Zeneca shot invited me to come have it on this past Friday. I feel blessed that all my networking has paid off and whenever my city decides to ever open up again, I’ll feel a lot more secure about entering the fray – not to mention, be able fly again as soon as flights open up here, and the UK will put Canada back on the ‘approved’ to visit list.

62 thoughts on “What’s my Rage? Why? #Guilt, #Grieving and #Loss – #Birthday #Coronavirus and the ‘System’”