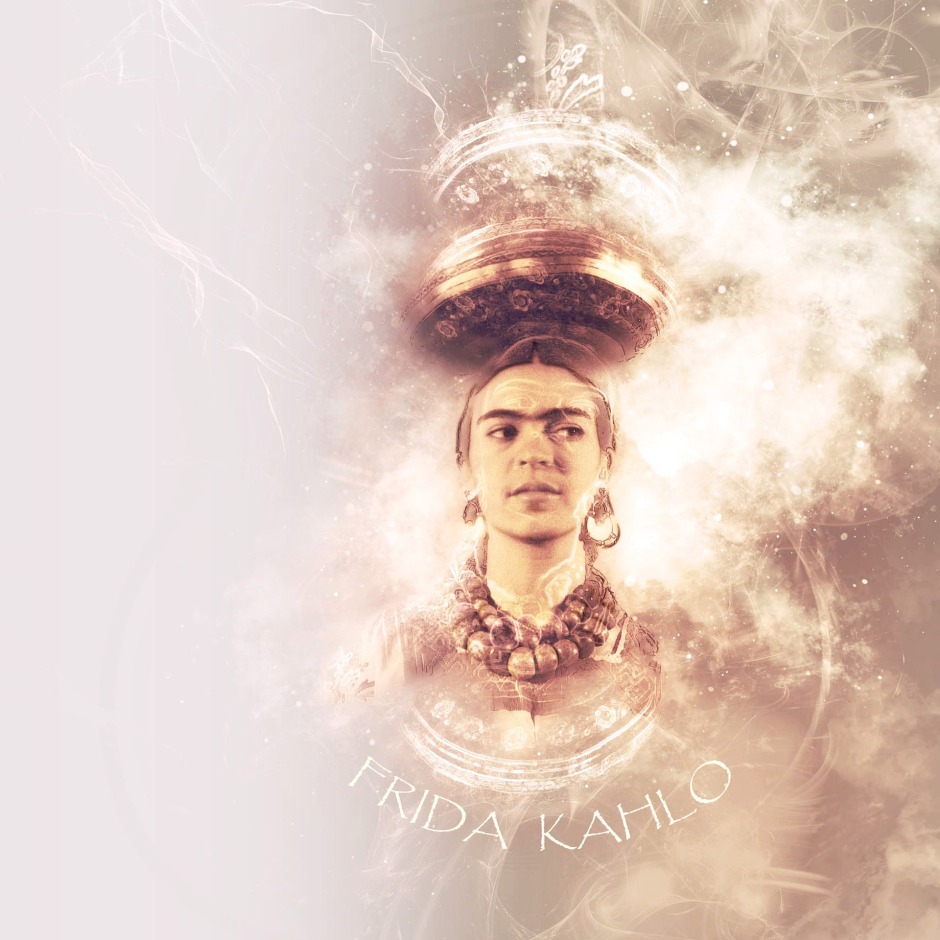 I’ve had a fascination with Frida Kahlo since I fell in love with Mexico. Frida was a bohemian free-spirited Mexican artist who is known for her unfettered strength in overcoming debilating physical illness and bullying when she was a young girl, first bedridden with polio, then later in her young womanhood years after recovering from polio, she was severely injured and mamed for life from a bus accident. It was when she was bedridden for months in a body cast that her father invented a makeshift way to hang an easel above her so she could paint, leading to her life as an eventual famous artist.

Frida Kahlo was born – Magdalena Carmen Frida Kahlo Calderon on July 6, 1907 in Mexico City, Mexico, and grew up during the Mexican revolution. Frida was the third of four daughters to her Mexican mother and her half German, half Hungarian father, born in Germany. When Frida was six years old she contracted polio and was left with one leg shorter than the other, which of course was good reason for other kids to make fun of her, despite the fact that she always wore long dresses to cover her smaller leg. And despite her illness she was quite clever and managed to excel through and finish high school at Prepatoria, which was recognized as one of Mexico’s presitigious high schools.

The first thing Frida is remembered for is the tragic accident she endured when a streetcar crashed into the bus that Frida was on. Frida was just 18 years old on that September 17th day in 1925. The accident had left Frida with several broken and fractured bones, most dangerously her spinal cord was fractured. Being bedridden and immobilized for many months in a full body cast, it was then that Frida began to paint, mostly self-portraits portraying externally how she felt on the inside. And during that time, she realized she wanted to be a painter more than to continue on to study medicine.

After Frida recovered from the accident, she formed relationships with other artists, and notably, the already famous Diego Rivera, who was 21 years her senior, and he ultimately, became her husband –  twice, and the love of her very interesting life.

Frida’s paintings continued to emphasize the pain she endured from the accident and the many operations that were to follow, and her exhaustive psychological pain. When asked about the symbolism of her paintings, this notable quote was Frida’s reply:

“I never painted dreams. I painted my own reality”~ Frida Kahlo

Frida’s art was deeply influenced by her Mexican culture, many paintings using vivid colors and dramatic symbolism, as well as both Christian and Jewish themes. In 1939 the Louvre Museum in Paris bought Kahlo’s first piece of 20th century art.

When Frida recovered from being immobilized by the bus accident, she approached Diego Rivera, an already famous painter whose work Frida admired, for advice about pursuing her art career. Rivera knew Frida had talent and guided her to becoming famous in her own right, eventually leading to the fiery love affair they engaged in together. And despite the disapproval of her parents, Frida married Rivera in 1929. It is said her parents referred to them as the ‘elephant and the dove’ because of their vast size differential to each other.

The relationship between this odd couple was often touted as tumultuous. Both Kahlo and Rivera had fiery instincts, both had extra-marital affairs. Frida was also an open bi-sexual. The saying goes that Diego didn’t mind her illicit affairs with women, but he was extremely jealous when she strayed with another man. It is said that the only time Frida didn’t approve of Diego’s wanderings is when he had an affair with her younger sister. Some thought it was payback from Diego, but it was enough for Frida to end the marriage. But that wasn’t the end because they both remarried each other in 1940. And their second go at marriage was just as explosive as it was the first time round. 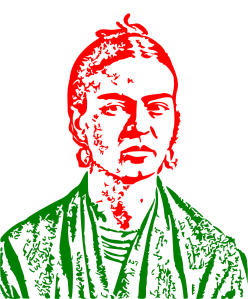 Later in their marriage, Frida and Diego became Mexican communist sympathizers and became good friends with Leon Trotsky. Later, Trotsky and his wife came to live with the Riveras while hiding out there as they sought sanctuary from the Soviet Union. And once again, Frida had an affair with Trotsky, which upset his wife and sent them packing, and eventually, they were found and Trotsky was assassinated.

Frida died on July 13th, 1954. It was said she died of a pulmonary embolism, but some others say she may have taken her own life with the many medications she took to dull her constant physical pain. In her last year she suffered pneumonia and gangrene in her leg, which was consequently, amputated at the knee. A few days before Frida died. she wrote in her diary:

Today, Frida’s home in Coyoacán, a borough in Mexico City, known as the ‘Blue House’ – “Casa Azul”, is a museum housing many of Frida’s works and relics and a pre-Columbian urn containing her ashes. After Frida’s passing, in Diego’s autobiography, he writes that the most tragic day of his life was when Frida died, adding his regret that only too late did he realize that the best part of his life was the love he held for Frida.

I also purchased on my numerous visits to Mexico, a beautiful beach coverup with a portrait of Frida painted on the back, as well as a beach bag with Frida’s face embroidered on the bag.

(Note: the material is wrinkled, not her face) 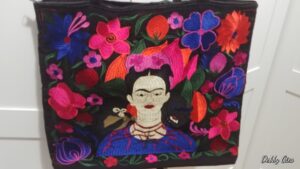 Click on the link below to see some of Frida’s beautiful art and more!

Check out this mini view into various aspects of Frida’s colorful life.

Some great photos of Frida and Diego and more famous quotes, click this link:

If you ever get a chance to watch, I saw a fabulous movie of the life of Frida, starring Selma Hayek as Frida, and it was a fantastic accounting of Frida’s life with a parade of stars. The biographical movie was made in 2002 and was simply called Frida, although Frida was far from simple. You can check out more about the movie specs below: