I went out for a measly twenty minutes. This is what ensued.

Hub and I were just about ready to venture out north to our old neighborhood pharmacy where our prescriptions still remain because of the most helpful pharmacy girls and pharmacist whose advice is invaluable. Anyhoo, I digress. When I was finally ready, hubby wasn’t having a good day physically, so I told him I’ll go north and pick up his pills and do whatever else was on the list. He insisted we’ll go together tomorrow. But in the meantime, I was dressed and masked and ready to go so I thought I’d take the opportunity to run out myself to the fancy supermarket a few blocks away, to pick up some nice steaks I’d noticed on sale when we were there only three days prior, but walked by them because we don’t typically eat a lot of meat. But we were having company on the weekend. And it was a special occasion since our good friends were coming for dinner – the friends we usually always got together with once a month pre-Covid, and now haven’t seen for 8 months.

So, I crossed that stopover off my list of stops for the next day and drove to the fancy supermarket. I didn’t take a shopping cart on the way in, because of course, I only went in for one thing – the steaks. The rest of my grocery shopping would be done the next day at the big grocery chain store.

I headed straight for the meat department and was grateful to find the lovely steaks still on sale. Then I remembered hubby asked for some nectarines, which were located at the complete opposite end to the meat department. This of course meant I was to pass many other aisles on my way to the nectarines. Did I mention I had no cart?

I doubled back when I realized I’d passed, first, a beautiful shrimp ring also on sale and a package of turkey bacon. I picked up one of each and piled them onto the four-pack of steaks.

As I was scrolling over a mental list in my head thinking about my menu for my gathering, I was nearing the butternut squash, just the soup I had in mind to make for an appetizer. So I picked up two boxes of already peeled and cut cubes (yes, I cheat, I hate dealing with whole butternut squash) and placed them on top of the shrimp ring. And while I was at it, right in front of me were some beautiful vine tomatoes. I managed to be able to pick up a cluster of four.

Last, and certainly not least, I made it to the nectarines. By this time, my two forearms were balancing my Jenga pile of food. My right hand cupped, shielding the pile from falling, which left my left hand free to grab a plastic bag, then transfer it to my right hand to hold while I leaned over to pick out some nectarines and placed them in the bag.

I put in however many my two fingers grasping the bag could hold and just as my mission was complete, I turned to leave and my purse hanging over my shoulder, knocked over one lone nectarine onto the floor. I stood there looking at it on the ground for a moment, all the while calculating how I could pick it up and restack my tower of food again. A woman standing barely three feet away from me had been watching me, as though she was waiting for something to fall. I stood there and sighed after the fallen nectarine, locked eyes with the woman looking at me as though I was mentally signaling her to offer a hand, but she made zero effort to offer to pick it up. I glanced again at the fruit on the floor then once more at the woman, shook my head at her and walked away.

The woman called to me as though she was the store warden, “Aren’t you going to pick that up?” .

I turned to her, now two aisles past her and shouted, “I can’t believe you’re such an uncourteous bitch!”

I was stunned. I’m the kind of gal who puts myself in other’s shoes. I could not have stood and watched a woman with her arms overflowing holding a stack of groceries, right beside me dropping a fruit and me not automatically reaching down to grab it for someone as a human kindness. You know, kind of like someone holding a door open for the person immediately behind them?

After checkout, I spotted the lottery booth had no lineup and thought it was a good opportunity to buy a ticket for the big pot. I approached the plexi-glassed desk and stood for about a minute to see how long it would take for the girl to lift her head from her cell phone and acknowledge the presence of a customer. But she didn’t. So I left.

I was pulling out of the small plaza up the last row of a dozen, closest to the exit. I braked to check for cars coming in and out before making my right turn onto the exit, then was about to proceed with my turn when a car booted up the drive , didn’t stop or care that I’d not yet completed my turn yet, but she proceeded to attempt to complete her turn into my lane with nowhere for her to fit her car and blocking me from being able to complete my turn because clearly, there was nowhere for her to go until I turned. That was it for me.

I opened my window and screamed out to the woman and let her know how #$#$@#@ ignorant she was, and told her to back up and let me get out before she could turn in. I also added there were a dozen other rows she could have turned into but had to try and fit in the lane by cutting someone off. I’m tired of these lawless people on the roads and parking lots any and everytime I go somewhere in the car. There are scary drivers on our roads, and I don’t know how many of them ever got their license.

I was going to run a return parcel over to the post office but I’d had enough for one day. One half hour.

I reminded myself just how comfortable I am living in my bubble at home. Maybe too much.

How was your day?

I hadn’t been out for 2 weeks – the last time I bought groceries. I try to make my grocery runs last 10 days to 2 weeks before I have to go out again. And when I do, I plan a route to cover groceries, pharmacy and health food store. But our prescriptions are up in the burbs where we used to live, and I wasn’t feeling inspired enough to drive all the way up there, and knowing I have to go up there in the next few days anyway, I decided just to pop into my local independent pharmacy to pick up a a few things that couldn’t wait and I happened to luck into his freshly stocked boxes of masks and disposable gloves. He even had a small amount of N95 masks for sale. I felt like it was Christmas!

And there’s a good tip for everyone who may not be able to find items in big box and brand retail stores because everyone is looking for the same things. It’s a good idea to try your smaller local independent stores, both pharmacies and food stores, places you may not suspect would have masks or rice or pasta sauces. You never know what you’ll come across.

While in the pharmacy, a woman turned to me and asked how do I keep my hair so vibrant without grey roots in this time, I laughed and told her I dye my own hair for 35 years, comes in handy LOL. Hey, just because I’m in seclusion doesn’t mean I have to let everything go. I may live in pajamas and/or sweat pants, and my hair may be in desperate need of a cut (even more so desperate since I attempted to crop my own top), but the crowning glory is always vibrant and my skincare beauty routine remains in full-force. These are considered essential non-negotiables for me. Exercise comes next – okay, I may slack sometimes but never on skincare.

Next, I headed for the supermarket. I’d last gone to 2 weeks prior and noticed quite a few changes since the last visit there. As I pulled my car in to park, I noticed ‘the line’. Oye, was this the line I’d heard others complain about but had been lucky enough to not yet have encountered?

I did a mental count of how many would be ahead, now lined up 6ft apart standing outside as only so many people allowed in the store at a time for distancing. At first I thought I should just get back in the car and come another day. Then I thought, as I put the car in reverse to pull out, who knows how many will be next time, better get her done.

There were 25 people ahead of me standing on our designated tape marks on the sidewalk, and it was a tad chilly for me in a spring coat, thinking it was 60 degrees out like my prior shopping day, but more like 40, oye! Only half hour wait went by til I entered. I read on my phone and was happy to find I could type on my phone with a latex gloved finger. It was nice and spacious inside and I even found toilet paper (which I bought as a top up), The shelves were all full, although I noticed I still couldn’t find raw chicken wings – anywhere, and a few items such as pasta sauces, some other canned goods, had limits.

I have to say I was impressed with the whole set up to protect both workers and shoppers. Plexi- glass now separated the cashiers from the customers. Some wore masks, all wore gloves. No using our own bags, back to the plastic they’d already taken away and now no charge for those plastic bags – go figure. Checking out was one line with taped marks for 6ft apart, but only 2 people ahead with only 2 cashiers opened and only so many shoppers at a time, it went fairly smoothly.

I was exhausted from that venture of pushing and schlepping my over-stuffed buggy and 6 more bags tucked on my arm as I plowed through the underground to the elevator, down the longggg hallway to home, then unpacking it all. Oh ya, I definitely wasn’t making two trips. That would have entailed waiting for an elevator, maybe a few times, as signs are posted only one person (or family) on at a time for safe distance. Those waits can be long. I’m pretty sure what I pushed and carried today is right up there with some of my airport wheelchair stories with my husband and 4 carry-on bags, lol. I’m just about ready to move park benches I tell ya! 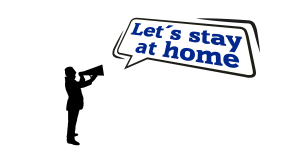