Welcome to my Sunday Movie Review. When I came across this doc about the life and career of best selling, unconventional author, Jackie Collins – younger sister to the actress Joan Collins, I knew I had to watch it. From her agent, Morton Janklow, “Some authors use their words so eloquently – and Jackie isn’t one of them.” 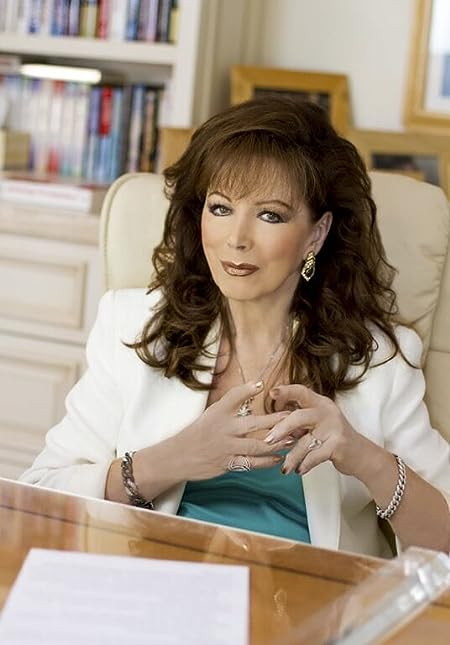 I was hooked on Collins’ books since the eighties. I didn’t realize she began publishing her first book in 1967 – The World is Full of Married Men, and readers both, loved and hated her. Collins wrote boldly of the world she did research in – her sister’s world of hollywood and their sins and secrets. She transformed her research into many books, a simple formula – she based her stories on real life people and called it fiction. How could we as writers, possibly not incorporate some of ourselves and observances into our writing?

Jackie wrote revolutionary novels placing female sexuality at the heart of her stories.

I could identify with so much of Jackie’s life – both personally and as a writer. And in those roaring 80s, I throughly enjoyed reading many of her books – especially the Lucky, Lady Boss series.

This was a wonderful documentary on the life of controversial author, Jackie Collins. Jackie was the younger sister of the famous Joan Collins. Joan was a natural beauty, and Jackie was not. Their father was in the entertainment business and wasted no time getting his pretty daughter Joan into movies. Jackie, more plain looking was happy to scribble writings about all she observed. Jackie seemed the underdog to her sister who had all the fame and fuss around her, but Jackie loved her sister and was thrilled to be invited to all the Hollywood parties her sister invited her to. This is when Jackie realized that her ‘scribbles’ could take on some serious meaning if she wrote books about Hollywood stars with all the gossip and information she garnered by becoming part of her sister’s circles. She preferred to call those outings – research.

Jackie’s women were all strong women in her books. Her writing began to empower housewives who were reading her books since the late 60s where sex talk was still taboo – for the most part. Her stories were rally calls for women to wake up and be all they can be. Many women fans adored her, while many others shunned her publicly when she was doing the talk show circuit. They bashed her for her raw smut, as many liked to call it. But Jackie stood her ground and continued to write for the millions of fans who did appreciate her candor. Many male writers felt threatened by her bold sex stories.

Jackie turned her plain old self into her own branding. Hanging out with the Hollywood crowd inspired her to fix her nose and have a little face construction. She began wearing sassy and bold clothes and did a lot of marketing her books on her own to gain momentum and brand herself as a strong, powerful woman. She was married three times – once to her first abusive husband that she empowered herself to leave in the middle of the night, while inspiring many other women to get out of abusive relationships.

Her second marriage to Oscar was the spark in her life. Til that point, Jackie had written numerous books she started and abandoned. Oscar pushed her to finish just one book, and the rest was history. He was her biggest supporter and loved her unconditionally. Jackie had kept a diary of much of her life – a treasure trove of life that became weaved into all her books.

Collins protested that men shouldn’t think they are the only ones to write about sex and love scenes. One of her best selling series was Lady Boss, where Lucky Santangelo was the lead strong woman. Her background stemmed from her mafia father Gino Santangelo. This series was all made into movies. Juicy movies I might add. Jackie’s husband Oscar adored her and dubbed her, the Harold Robbins of women.

In the late 80s, at the height of her fame, Oscar was diagnosed with prostate cancer. He chose not to tell anyone and knowing he was on borrowed time wanted to leave his wife a beautiful legacy home and began building it. Sadly, it was Jackie and her kids who ultimately moved into it as Oscar didn’t live through the completion. Jackie kept up face on camera, but she was devastated by the loss of her beloved husband.

By the time the 90s rolled around, people’s attitudes were changing about women’s rights and sexual freedom. Jackie lived in her beautiful house and kept her nose to the grindstone writing to fill her empty broken heart.

Somehow, Jackie met a third husband, which nobody approved of. Her own daughters (who were narrating the documentary), questioned why she would marry such an ill-tempered and abusive man. Frank was relentless trying to win over Jackie’s affections. Sadly, she couldn’t ‘read between the lines’ and found herself trapped with a bully. But as karma made it, a few years later Frank died from brain cancer. Jackie assured everyone she would never marry again.

Jackie’s mother died of cancer, and her first husband wound up committing suicide. And not long after the last two husbands passed, Jackie herself detected a lump in her breast and decided not to do a damn thing about it – no treatments to ravage whatever time she had left. Jackie wrote feverently, writing her own ending her own way. Jackie lived six more years after being diagnosed with stage IV breast cancer and having no treatments, as well as telling nobody. Until two weeks before her death, she finally told her sister Joan. Born October 4th, 1937, Jackie died on September 19th, 2015, two weeks before her 78th birthday.

From her agent, Morton Janklow: “Jackie was a great storyteller, and that’s better than being a great writer.”

Author Dominick Dunne: “And although she was a “great partygoer”, he says, she went to them “more as an observer than participant”, using them as part of her research.”

“Write about what you know”, Collins said at a writer’s conference. “I love what I do. I fall in love with my characters. They become me, and I become them.”

Collins fictionalized parts of her own life to construct her Hollywood stories.

Jackie wrote 32 books and sold over 500 million copies! Eight of her books were turned into movies and miniseries. She did play in some small acting roles in the 50s, but writing was in her veins.

You can watch a short clip here from Jackie.