A few months back, I wrote a post on “Murphy”, my pet name for his origin is Murphy’s law. Murphy has a tendency to show up in my life at most inopportune times, hence the name, so of course it would be inopportune!

Murphy has been circling my orbit for the past two weeks. I have tried to ignore him and refused to acknowledge that it was once again my turn in the universe to be graced with his presence. I know when he’s around, he’s like Santa; he sees you when you’re sleeping.

In these past two weeks, things around my house have been mysteriously breaking down or malfunctioning. Communications have had SNAFU’s and anything I was trying to accomplish was being time-sucked by distractions and mishaps which I had to attend to. One day my Lazy Susan cupboard or ‘the magic cupboard’ as my cabinet maker who designed it named it when I bought and renovated my house completely last year, wouldn’t open more than 8 inches for me to get into it to access my various cooking ingredients. I suppose Susan lived up to her name. That was the week of the Polar Vortex and I need not go into what that weather situation entailed after the great ice storm. Coincidentally at that time my gas fireplace conveniently died. And of course that happened on a Friday night so it couldn’t get serviced until Monday which again turned into Tuesday because people whose furnaces broke down took precedence over fireplaces. The repair man finally came, made it work but found no known reason to man why it didn’t work.

Two weeks ago I went to my mailbox in anticipation of finding my Conflicted Hearts books there, only to wipe out on the icy sidewalk and sprain my ribs and upper arm…and no books! Yesterday in the middle of checking back and forth at my sales rank on amazon during my first KDP promotion, my laptop CRASHED…AGAIN! That would be two hard drive crashes in 5 months. Can this even happen? I spent two hours on the phone (instead of writing) with Dell tech support, chewing them out for a crappy product while trying to analyze the problem. Another thing that got me steamed about the already aggravating situation was they informed me that they would come an repair and put in a new hard drive for me but they were taking the old one with them. WHOA!  I said, “What?” Apparently if I don’t let them have the old one, I would be charged $80.00! “Are you kidding me?”, I questioned in a not so friendly tone. “I’m not giving you guys my whole personal world in that hard drive, that’s invasion of privacy,” I added. I thought the crash was enough punishment. They patiently replied that they don’t look at my information. So what the heck do they need it for! I thought when I bought the darn thing with all its components that it belonged to me. Why is their property? What is this world coming to? So my choice became give up the hard drive or pay. I was steamed So I ventured out to my local business depot today and took the dead machine over so they could swipe off all my info and paid them twenty bucks. I sure wasn’t going to give them my life on it.

In the midst of my mayhem, I was eagerly watching my author rank and downloads during my promo and I was so elated that my book Conflicted Hearts, made #1 in the top free NonFiction/Memoir category. It was a thrilling end to a crappy day. So as the saying goes — There is a silver lining! 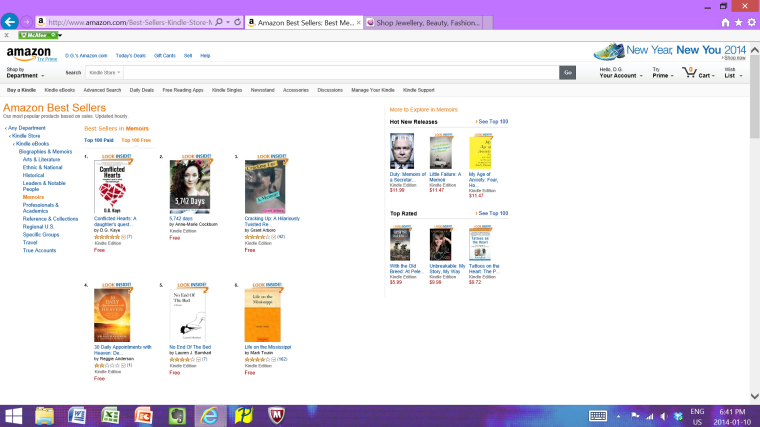 I also wanted to take this opportunity to thank all of you who participated in getting my book and I hope you all enjoy it and if you did, please write a review on amazon because that is how our books get pushed up into visibility. I also want to thank many of my friends here for helping to spread the word for me and a special thanks to Diane Tibert for doing a lovely post about my book on her website for me. Please click on the link below to have a look.

I wish you all a great week and remember –Beware of Murphy!