Welcome to my Sunday Book Review. Since my husband’s passing I have had difficulties reading books for pleasure. My focus has solely been on surviving grief and reading many recommended books along the way that I ran to in search of some kind of comfort.  Regular ‘programmed’ reading had taken a big back seat, which leaves me well behind my reading goals, but I’m thrilled to share my first book review for a book I began reading during my husband’s illness and had to abandon, but have recently completed reading – The Heart Stone by Judith Barrow. I loved all books I’ve read by Judith, and this one didn’t disappoint. The lull in completing to read this book was due to my grief, in no way a reflection of my interest in the book. Read my 5 Star review below. 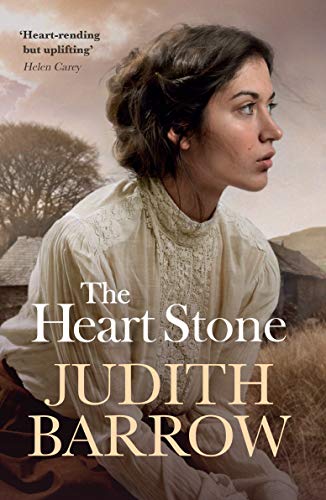 Get This Book on Amazon!

1914. Everything changes for Jessie on a day trip to Blackpool. She realises her feelings for Arthur are far more than friendship. And just as they are travelling home, war is declared.

Arthur lies about his age to join his Pals’ Regiment. Jessie’s widowed mother is so frightened, she agrees to marry Amos Morgan. Only Jessie can see how vicious he is. When he turns on her, Arthur’s mother is the only person to help her, the two women drawn together by Jessie’s deepest secret.

Facing a desperate choice between love and safety, will Jessie trust the right people? Can she learn to trust herself?

This is a beautifully written heartfelt story that takes place during the beginnings of World War I through 1921. It’s the story of love and war and the people whose lives are affected, painted beautifully with imagery and prose by this talented writer who is known for her heart-wrenching family saga historical fiction storytelling. It’s a story about struggles, love, hatred, abuse, survival, and highlighting the strength of the women left to endure.

Jessie and Arthur are best friends since childhood, now teenagers at the tender age of 16, who’ve discovered their friendship has blossomed into true love, Arthur decides he must enlist to join the war, despite his not being of legal age yet.

Jessie’s widowed mom runs a bakery and Jessie works alongside her mom to run the store, but at the news of upcoming war, quite a few bakers enlisted, leaving mom with the decision to marry Amos Morgan, head baker, who Jessie detests and remains puzzled why her mother would succumb to allowing Amos into the family business by marrying him.

In her own worries, Jessie and Arthur’s friendship turns into a romantic relationship just before Arthur announces he’s enlisted – under-aged, but the thrill of asserting his manhood calls, and he volunteers to join the fight with his country, England. This decision leaves Jessie distraught and tightening her bond with Arthur’s widowed mom, Edna, as they can share their worries and commiserate together.

Months pass no word from Arthur, but Jessie, now pregnant from their last goodbye stint continues to visit the the heart stone up the hill where they declared their undying love forever before Arthur left. Meanwhile, Amos the pig, married to Jessie’s mother, finds every opportunity to ‘touch’ Jessie. This was enough for her to revolt and move into Arthur’s mother’s home with her as a safe place and company to raise the baby.

Time passes and there’s no word from Arthur, but Jessie keeps in touch with her friend Clara, married to Stanley, Arthur’s best friend who also enlisted for war. Stanley eventually returns home – in a wheelchair, but home. Jessie travels to visit them in hopes to discover some news about Arthur.

Back at the bakery, Jessie’s mom falls ill and becomes bedridden, putting more pressure on Jessie at work – and more time around the pig, Mr. Morgan. After mum passes, Morgan takes over the bakery, even though it is rightfully in mum’s will left to Jessie, and that presents another interesting tidbit as to how he took over and what happened after; karma perhaps? And then suddenly, another baker, ‘old’ friend of Jessie’s, Bob Cleg, proclaims a sudden desire for Jessie. Somehow these two end up married – not in a good way, and a lot more dramatic things happen along the book to keep us turning the pages, and alas, Arthur returns home! This changes the dynamic of things to come now that Jessie is unhappily married to a man she can’t stand and the love of her life returns. And to find out what happens next, you are going to want to read this book!